There’s been an awful lot of sudden loss and grief among my friends in the last week. I also have friends who have daily struggles with some monumental life curveballs.

It’s so difficult to find the right words sometimes. “I’m here. I’m listening. I love you.” are all I have. I can’t fix. In many cases, I can’t physically be there, so I have to come to terms with having peripheral value. I can’t take away someone’s pain. It’s a necessary part of the grieving process. I would like to offer strength, but it’s a nebulous concept.

I look at my life and realize that I’ve got so much, and yet, I’m still striving and frustrated because I am not achieving my goals. And I feel bad for complaining that I’m frustrated and depressed. (there, I said it. Depressed. Ugly creature that it is, its hold on me is a lot like someone trying to drown you slowly).

I’ve been looking at lot lately at failures I deal with. Losses I am coming to terms with. Missing those souls that touched my life in ways I could never count who I can’t thank in person.

If I ever misplaced my Goth Card, it’s accruing points again at an alarming rate.

I keep having these feelings resurface where I feel like what Paco used to refer to when he called me Witch. Someday, I will find that story he wrote. It was on yellow lined notepaper and I put it someplace where I would find it when I needed it.

As I start cleaning out all my decades of clutter, preparing, nothing gets pitched without a good once over. It’s there.

I’m trying to focus on a big work task, but I’ve got incense and candles, coffee and loud music stirring my soul.

A little chaos magick for my Thursday seems perfect. I know what the first thing should be that I scribe with the new ink that should show up today!

Many years ago (about 1996, I think) I was at a work crisis crossroads. And it wasn’t because I had screwed up. It was because I had succeeded far better than anyone expected and others wanted what I had created (and since they were related to the CEO, they got what they wanted and I was left to figure out the big question: What Next?)

Well, I ended up going to a therapist and in their estimation, taking Prozac would solve my problems. So I took it for a year. And for that year, I was a zombie; devoid of any depth of emotion. Sure…the rage was gone, but so was the ecstatic joy. After about a year, I stopped taking it…and those delicious highs (and treacherous lows) returned. Turns out, I wasn’t depressed, I was just wholeheartedly frustrated with what happened and hadn’t learned any appropriate coping mechanisms.

So, now I have coping mechanisms, and my problems are really very manageable…but for the last year (perhaps a little more), I’ve felt like I’m on Prozac. There are no highs, and no unexplained lows.

Until today, when I felt the first ridiculous amount of incidental, but ferocious rage. What brought it on? Mostly arrogance, as witnessed by friends on Facebook, political candidates and coworkers. Arrogance seems to be my line in the sand. Most of my ‘in my head only’ rages take the form of “just because you [can’t, won’t, don’t] actually means jack shit in the bigger picture. You can quote [a single study, your college education, general observations] until you’re blue in the face, if my world view is different and my facts check, your ‘opinions’ aren’t worth the bits they take up.” I’ve come across so very few absolute truths in my lifetime that I have little tolerance for arrogance backed arguments to the contrary.

So rage. And you know what? After feeling so little for so long, I’ll take it. Perhaps that means that the pendulum still swings and the pivot has been wrenched from stoic indifference at last.

and in the meantime “fuck you”

My conscious and subconscious minds are stockpiling fears at an alarming rate.

Things have got to change.

Every year when I write those words I realize it’s one more cycle that I’ve lost. One less cycle to try.

Here’s a few things I need to do. As in must do.

Three things that should be more than sufficient to fill my non-work head with beneficial thoughts.

" You have to believe in yourself in an almost crazy way. You have to be bold enough to make something from nothing over and over again. And you have to be delusional enough to think that your ideas are valuable" Rebecca Rebouché

I don't tolerate "the great false humbling movement" in the least. I won't apologize for who I am, the way I love, or what I believe.

I believe in myself and my talents, goals and dreams. I'm willing to say that often and out loud.

Once again: Those that matter don't mind, and those that mind don't matter.

I mean, I have enough college psychology under my belt that I could probably pick some things apart and gain insight (who has the time?), but as a whole...I just don't understand people.

I can't count how many times a day I think "this? This is what you stand for, believe in, justify, defend? Why?" Oh yes, I judge actions, not people.

I am attempting to get over that fact that what others think really isn't my concern. It's their lives and they can do and think whatever they damn well please. I just need to stop letting it surprise or bother me.

I've been told all of my life that I hold friends, loves and family to a high standard. It's usually said like it's a bad thing. I won't ever be convinced of that. I am aware that there will inevitable disappointments. I get it that we're all fallible...but it's how we deal with what happens next that matters.

It's for these reasons I distance myself from most, and try to keep company with folks who are truly happy and striving to make the short time they have here remarkable.

(side note to BFF...none of this introspection is about you, goose.)

I had a message last night from a friend asking me to call. I didn't see it until this morning when I found out that he had tried to contact me about a friend passing. I appreciate that gesture deeply.

About 20 years ago I had the immense pleasure and shared insanity of being adopted into a group of crazed mages. Martin was among the most crazed and therefore beloved. Stories of his triumphs and breakdowns were the things of legend. My very most favorite memory of him was a quick synchronized Thelemic jig danced with William at the funeral of another of us. I'm certain that many secrets above my grade were shared that day.

My favorite stories of Martin were in his idiosyncracy of trying to walk through doorways that no one else saw. These generally resulted in facial bruising and embarassment. I always wondered if we believed in the doorways as much as he did, if we could all pass through them.

Martin, sadly you finally found one such doorway and crossed alone. I wish you the peace you were searching for.

The problem with aging is that you can't take all your friends and loved ones with you for the entire ride.

Say hello to Paco, Paul, and Charles for me. Tell them they are still missed.

I just got the coolest compliment. Our young attorney just breezed into the marketing office where Connie was talking to Anne and Anna. He marches through to my desk announcing "you guys want to see something cool? Watch this!"

He sits down on the table behind me and asks "Do you have any projects planned for this summer?"
Puzzled, I answer "here or at home"
"Home"
"Well, I have one project to redo the entrance way in the front"
"What's the plan?"
"Well, I want to use river rock and then occasional pieces of large flat stones where I can do some container gardens. Then redo the front porch with a small wooden deck..."
At which point he politely stops me and says "See! She's like a walking Pinterest Page! She always has the coolest things planned or an interesting opinion on any topic you ask about. If you ever need a break, go talk to her about anything!"

This. These words...I have achieved what I have wanted to be. I needed this so much after my last post where I felt like an old broken record.

This beautiful creature greeted me this morning, Lisa reminded me that animals that are rare can have meaning if we pay attention. I will look at this sighting as a gift. 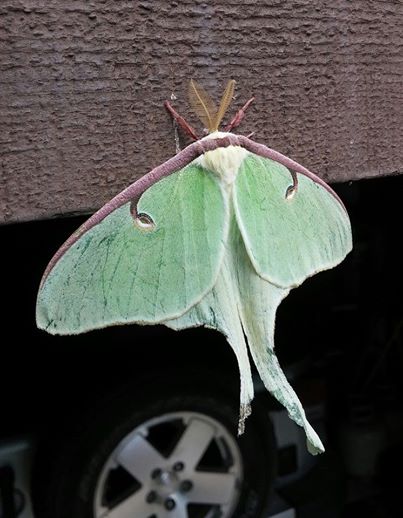 Luna moths also signify rebirth and new beginnings as they represent a continuing quest for truth and knowledge, gift of intuition, psychic perception and heightened awareness. Things associated with “seeing the light” since the luna moth is nocturnal but gravitates toward light in the night.